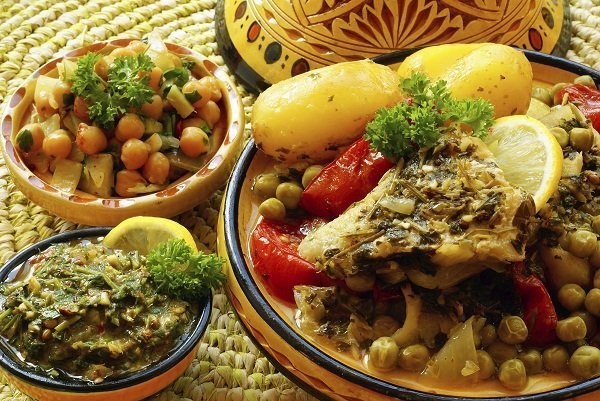 Known for its mouthwatering dishes, Morocco is ranked ahead of many of the gourmand’s global destinations such as France and Italy.

“Morocco is the place to go for the best Berber cuisine on the planet,” writes the Worldsim.

“That means fragrant tagine pots served in the midst of ancient medina towns, herbal teas to boot, and some of North Africa’s freshest fish,” the same source added.

Nearly all the restaurants within the kingdom offer various authentic Moroccan dishes; however, Djemaa el Fna square in Marrakesh remains the most famous spot where one can try all the varieties of Moroccan cuisine.


Along with folklore activities, the square offers about a hundred food stalls arranged in parallel lines serving various tasty meals cooked and served in the open air.


The square offers a variety of Moroccan dishes such as roasted meat, kebabs, couscous, soup and other delicious meals that can be eaten at nearby wooden tables on the square.

Although some Moroccan specialties such as sheep’s testicle, escargots, steamed sheep’s head and spicy fried cow or sheep’s brain may seem very strange and more exotic, their taste is irresistibly delicious, and their prices are reasonable.

Most famous dishes in the Moroccan cuisine:

Couscous is a purely Moroccan dish. Traditionally, it was the regular dinner for nearly all Moroccans, but as time went by people started to usually prepare it every Friday.  Like any pasta, it is prepared with flour rolled in a skilful manner to form fine grains then steamed for a while and dried. When it is dried they store it in bags. Fortunately, ready to use couscous can be found in every market.

Tagine is named after the special earthenware pot in which it is cooked. Yet, for all Moroccans it connotes an irresistible delicious taste and a pleasingly sweet smell. It is cooked and braised slowly at low temperatures, resulting in tender meat with aromatic vegetables and sauce, and it is served hot.

It has different distinctive sweet tastes depending on the ingredients, but the process remains the same.

Bstilla is undoubtedly one of the ultimate manifestations of beauty, refinement and delicacy of Moroccan cuisine. It is prepared for great dinners and wedding ceremonies. Usually, it is served after small plates of fresh salads and before the Tagine with meat.