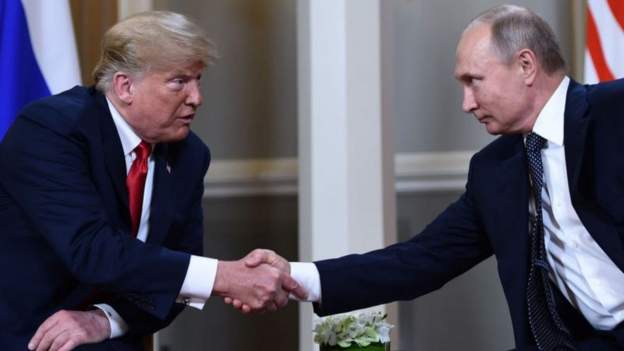 So far, no tweet, no telephone call, no congratulatory telegram from President Putin to President-elect Biden.

The Kremlin is silent.

But not so Russian state TV’s most controversial news anchor Dmitry Kiselev, who has delivered a stinging rebuke of the US election.

“The US electoral system is so archaic, such a dinosaur, I can’t bring myself to call it democratic,” he told viewers of his flagship weekly news show.

“US President Trump speaks of mass ballot-stuffing by the Democrats, he says fraudulent methods are being used to steal the election from him.”

Mr. Kiselev omitted to say that the president had provided no evidence for this.

The news anchor has a reputation for colorful anti-Western monologues. Even by his standards, today’s performance was eyebrow-raising.

He criticized US TV networks for collectively switching away from Donald Trump while he was talking, calling it “a sign of a colored revolution” in America.

“For a long time, America tried to teach us. Now the teacher has gone on the rampage, smashed the windows, and pooped in his pants.”

The aim here: to try to devalue American democracy in the eyes of the Russian people. And, in so doing, make them feel better about Russia’s own political system.