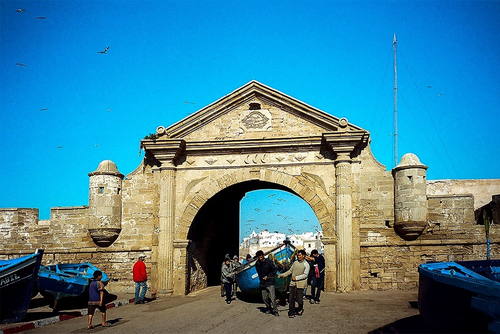 The Medina of Essaouira, formerly named Mogador (a name originating from the Phoenician word Migdol meaning a « small fortress »), is an outstanding example of a fortified town of the mid-eighteenth century, surrounded by a wall influenced by the Vauban model. Constructed according to the principles of contemporary European military architecture, in a North African context, in perfect harmony with the precepts of Arabo-Muslim architecture and town-planning, it has played a major role over the centuries as an international trading seaport, linking Morocco and sub-Saharan Africa with Europe and the rest of the world. The town is also an example of a multicultural center as proven by the coexistence since its foundation, of diverse ethnic groups, such as the Amazighs, Arabs, Africans, and Europeans as well as multiconfessional (Muslim, Christian and Jewish). Indissociable from the Medina, the Mogador archipelago comprises a large number of cultural and natural sites of Outstanding Universal Value. Its relatively late foundation in comparison to other medinas of North Africa was the work of the Alaouite Sultan Sidi Mohamed Ben Abdallah (1757-1790) who wished to make this small Atlantic town a royal port and chief Moroccan commercial center open to the outside world. Known for a long time as the Port of Timbuktu, Essaouira became one of the major Atlantic commercial centers between Africa and Europe at the end of the 18th century and during the 19th century.

Criterion (ii): Essaouira is an outstanding and well-preserved example of a mid-18th-century fortified seaport town, with a strong European influence translated to a North African context.

Criterion (iv): With the opening of Morocco to the rest of the world at the end of the 17th century, the Medina of Essaouira was laid out by a French architect who had been profoundly influenced by the work of the military engineer Vauban at Saint-Malo.  For the most part, it has retained its appearance of a European town.

Already completed by the 19th century and clearly defined by its ramparts, the Medina of Essaouira possesses all the essential components of its integrity.  Comprising a harmonious ensemble associated with natural elements (Mogador Archipelago) and high quality cultural elements, the town today retains its integrity and its original distinctive style. Despite its integrity being slightly altered, notably due to degradation of buildings in the Mellah district, the degree of loss does not compromise the significance of the property as a whole.


The state of conservation of the Medina of Essaouira is increasingly improved due to the efforts of the local authorities and the vigilance of the authorities directly concerned with its protection and presentation.

Founded in the middle of the 18th century, the Medina of Essaouira has for the most part conserved its authenticity as regards the conception and outline as well as the materials (use of local stone called manjour) and construction methods, and this in spite of some inadequate use of modern materials for repair and reconstruction work. Notwithstanding the sea swell and dampness elsewhere, the fortifications and urban fabric conserve, on the whole, their original configuration.

Protection measures essentially relate to the different laws for a listing of historic monuments and sites, and particularly the Law 22-80 concerning the Moroccan heritage. Ownership of the elements that make up the historic town of Essaouira is divided between the State, the municipality, the Habous, the Israelite Alliance, cooperatives and private individuals. The 1988 urban plan No. 4001 provides for a buffer zone around the historic town within which construction is prohibited. Two significant protection and management measures are currently in the final stages of application.  These are the Master Plan for Urban Development of the town of Essaouira and the Safeguarding Plan for the Medina.

The local population, the public authorities and the associative areas are increasingly aware of the Outstanding Universal Value of the Medina. The Essaouira Urban Agency was created to ensure a better control of town development in general and the medina in particular. In parallel with other ministerial departments and services, this Agency should, plan and coordinate efforts and monitor the execution and implementation of the ongoing or planned work sites.  Contingent upon the establishment of a management plan for the medina that should both safeguard the architectural heritage and improve the living conditions of the local population, the authorities concerned for the protection and safeguard of the property must supervise the application of the development plan for the medina and the entire town of Essaouira.